My main motivation here is to popularise the so-called footprint bound, especially among combinatorialists (combinators?).  As an application, we will see a nice “conceptual” proof of the so-called Alon-Füredi theorem, which is a result that in particular solves the following well-known geometric problem whose

be a finite subset of a field

. What is the minimum number of hyperplanes in

that can cover all the points in

, while missing the point

To be able to state the footprint bound we need some definitions. A monomial order is a total order on the set of all monomials in

which satisfies the property

. For example, we can look at the graded lexicographic order in which we first compare the total degree of the monomials and if that’s equal then we compare them lexicographically, i.e., for

and the left-most non-zero entry of the vector

is positive (so for example, we will have

Now given a polynomial

and a monomial ordering

, we denote the largest monomial  appearing in

is an ideal of polynomials then we define

, we are going to give an upper bound on the set

(these are also known as standard monomials). Then this set

is known as the footprint of the ideal

is finite, then we have

. Moreover, the bound is sharp if the ideal

is radical.
Proof. Exercise! (show that

is a basis of the vector space

Of course, the usefulness of this bound (at least in combinatorial situations) depends on how easily we can calculate, or estimate,

, and since we have a finite list of monomials to check, with right choice of

‘s it can be easier to compute

to be equal to

, and in fact this does happen when

forms a Gröbner basis of

(if you know what a Gröbner basis is; but you don’t really need to for the rest of this post). Let’s consider an example. Let

, and consider the graded lexicographical order. Then the multiples of the leading monomials

can be seen pictorially as follows: 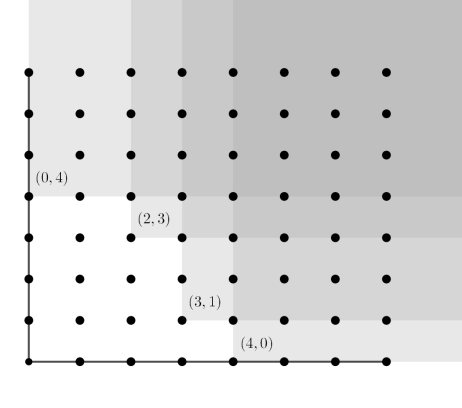 The monomials which are multiples of these four monomials, i.e. the monomials in the ideal generated by these leading monomials, correspond to the integer points in the shaded region. Therefore, the elements of

corresponds to the points in the unshaded region, and hence

, which implies that these polynomials have at most

contained in a finite grid

does not vanish on all points of

. This is precisely what the Alon-Füredi theorem is all about. Let

is a polynomial of degree

, and the points of the

are the common solutions of the polynomials

. For that we will first assume that

is in its reduced form, so that

(with respect to any monomial ordering) is of the form

. We can always do this by reducing higher powers of

by using the equation

is the leading monomial of

is equal to the set of all monomials of the form

where there exists an index

. The number of such monomials is in fact equal to

is the total number of reduced monomials, and

of them are those which are multiples of

, which directly implies the Alon-Füredi theorem:

be a polynomial which does not vanish on the entire grid

does not vanish on at least

Compared to the other proof of the Alon-Füredi theorem, I feel like this proof gives us a better understanding of where that bound comes from and “why” this theorem is true. Also, the same proof also gives the generalized version of the Alon-Füredi theorem [3, Theorem 9.1.2] (over fields). Moreover, one can also prove Alon’s combinatorial nullstellensatz using the footprint bound as follows.

. Then there exists an

.
Proof. The size of the footprint of the ideal

is strictly less than

, being the exponent of a leading monomial, is not contained in it. Therefore by the footprint bound we have

, which implies that there is a point where

So, footprint bound is a nice algebraic result which has several interesting applications and extensions [2, 4, 6, 7, 8, 9, 10]. It is particularly useful for studying systems of polynomial equations over a finite field

, where we can take the grid

to be equal to

. For further reading on this bound see the papers in the references below.

And now for the extra theory, here is a characterisation of systems of polynomial equations which have only finitely many common zeros (the so-called zero dimensional affine varieties over the algebraic closure of the field).

be an algebraically closed field and let

be an affine variety in

is an ideal in

. Then the following statements are equivalent:

1 Response to The footprint bound

I Can't Believe It's Not Random!

Updates on my research and expository papers, discussion of open problems, and other maths-related topics. By Terence Tao

"Everything can be made radically elementary." ~Steven Rudich

A tale of life AFTER the Emerald City.

A compendium of my lecture notes, learning and resources for further reading in architecture

A bit of everything

Ratio Bound – A Combinatorics Blog
all the women

Becoming My Better Self

We can never be perfect, but we can always be better.

Discrete geometry and other typos

For the love of Mathematics